Then one reader asked:

I was wondering if you could compare the Canon 60D and the Panasonic GH2. I would mainly be using the camera for video production. Am torn between them. Any insights or advice you could provide? Thanks!

So, here’s how this looks to me.

Okay, let’s get this out of the way right now. Yes, the Panasonic GH2 is not a really a DSLR. It has no optical viewfinder fed by a mirror that flips up out of the way when you take a picture. Is this an important distinction? Not if you’re shooting video.

When you shoot video with a DSLR the mirror is locked into the up position and you use the LCD screen to frame your shot. If you’re shooting stills for a living you’ll likely be more comfortable with a the optical viewfinder but for video you’re either using the LCD or tapping the camera for an external monitor. And that’s true of all DSLR’s.

Take A Look At This…

And, speaking of LCD’s, this is one of the reasons why these two cameras are better for video than other DSLR’s. Both have articulating LCD screens. You can flip the LCD out and adjust it like virtually all video camcorders. You now longer have to keep the camera at eye level to see what you’re shooting.

And, speaking of seeing what you’re shooting, one of the features of the GH2 is clean HDMI output. Not only is it perfect for feeding an external HD monitor, the HDMI output on the GH2 is uncompressed 4:2:2 8bit like the AF100. That means you can add an external recorder like the KiPro and the GH2 delivers 100Mbit ProRes 422 video.

The Canon 60D has a higher quality LCD on the camera but it suffers the same fate as other Canon DSLRs (except for the 7D). When you hit the record button the HDMI output drops from HD to SD.

So, this point goes to the GH2. In some matches, the ability to output clean HDMI alone would be the end of the story, making the GH2 the game winner.

Both of these cameras give you simple manual control of the incoming audio level and they both have a stereo microphone input. Even if all you use it for is reference audio, it’s great to have that reference be a usable audio track when you get to edit. And if you plug in a decent microphone you can get much better than just usable audio.

The GH2 also has on screen audio levels which makes it even easier to get good audio. While I recommend treating on screen meters as an indicator that you’re getting audio rather than accurate tools like professional VU meters, it’s way better than nothing.

Production units are not easy to find yet so we don’t know if the audio is adjustable while shooting with the GH2. But a little testing before shooting and keeping the audio safely below peaking should do just fine.

And this point goes to the GH2.

Also, my perspective about the two codecs these cameras use is simple: it doesn’t really matter.

In the overall workflow of a production it doesn’t make any real difference. Whichever camera you use you’ll need to learn the limits of the system and how to get the best compromise for your type of production. Yes, it’s apples and oranges but they are both still fruit.

All this is true as long as you’re dealing with recording directly to the SD card in the camera. But with the GH2 you have the option of recording the HDMI output as 100Mbit ProRes 422 video. And, like I said, that makes it a superior choice.

We don’t need no stinking adapters

One of the biggest differences in these two cameras is the lens mount. The Canon 60D uses an EF mount while the Panasonic GH2 uses a micro four thirds. Note that this is “micro” four thirds – there is a normal four thirds mount as well.

On B&H right now, there are 237 lenses that match a Canon EF mount. There are 20 lenses for micro four thirds mounting.

Even more importantly, if you want to take advantage of the continuous auto-focus or the touch sensitive auto-focus features of the GH2 you’ll need to use the kit lens. Otherwise, you’ll need an adapter.

Panasonic says their DMW-MA1 Mount Adaptor “takes advantage of various functions of the DMC-GH2.” There are some Panasonic normal four thirds lenses that use some of the features meant to make video focus easier.

If you want to shoot with Canon or Nikon lenses on the GH2, you’re pretty well limited to an adapter with no electrical connection so you’ll need full manual control on the lens.

The Canon 60D will work with all EF lenses right out of the box. Of course, it doesn’t have all the auto focus features of the GH2 and you’ll still need an adapter to use those low-cost Nikon manual primes.

More options for lenses gives this point to the Canon 60D.

Both of these cameras will crop the image of a full sensor lens. Cropping makes the lens look like a longer lens.

But, with either camera you’ll have to deal with this effect. If you absolutely need the wide angle full sensor look you’re going to have to go for the Canon 5D.

On the other hand, the sensor size of the Canon 60D and GH2 are closer to the standard for traditional motion picture film cameras and that “look” is acceptable around the world.

The full set of pixels in the GH2 sensor will create a 16 megapixel still. That’s a lot more than HD video can handle so the camera down-samples the image to make it fit.

The GH2’s 1:1 mode takes a 1920 x 1080 image from the center pixels on the sensor and sends it direct to video. It makes your lenses even more telephoto but it also captures a stunning HD video image with no artifacts from down-sampling.

No contest here – GH2 gets the point.

For most people, this means investing in a follow-focus so they can precisely and smoothly control the focus. You can spend from hundreds to thousands of dollars on a follow-focus and you’ll need to spend many hours to become a master of using one.

The Panasonic GH2 offers touch screen auto-focus which shifts the focus from whatever you touched to whatever you touch next. You won’t get the same precision you’ll get with an experienced hand on a high quality follow-focus but it’s likely to do the job for most people.

Panasonic claims it will even hold focus on faces when people move through the frame. This type of auto-focus for video can really makes sense for most projects.

This point goes to the Panasonic GH2. 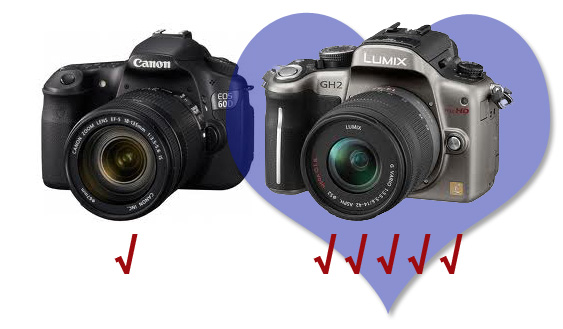 Adding up the score we get five points for the GH2 and one for the Canon 60D. I didn’t even get into the “intelligent” GH2 features that may help you shoot better video. And then there’s Panasonic’s Cinema Mode which not only shoots 24p, it sets up the camera for a very film-like profile. There’s just no other DLSR that comes close if you’re planning to use it for shooting video.

And that is a point worth considering for one more moment.

The Panasonic AG-AF100 uses the same sensor as the GH2. But it comes in a body made for shooting video. It has the same micro four thirds lens mount so you can work with a variety of lenses. Add in XLR microphone inputs, headphone jack, etc., etc., etc. and you’ve got a high quality, film-like video camcorder for professional use.

The GH2 is a still camera that shoots video. Amazing video, especially for the money. But it’s not a video camcorder.

So, it you have the budget or if you’re shooting video as a professional you’ll likely be happier with the AF-AG100.

But, if you’re looking for a DSLR that shoots great HD video the Panasonic GH2 is the only way to go.

Leave your comments and let me know what you think.

PS – just to be clear… I have not shot side by side comparisons of these two cameras. The GH2 is just now being released on the market and there’s not much real-world experience with it. My conclusions are drawn from personal experience and tons of research. Also, my values and perspective are not the same as yours. I always recommend getting your hands on the gear and finding out what works best for you.